This thread is for the truck profile titled "1972 F100 Shortbed Bumpside". Click the Watch button to get updates and comment on it below.
-Chris

I'll be sure to updated this build thread with all the work that I do to it.
-Chris

Well, just an update on the F100... when it was delivered I noticed a significant fuel leak from the carb. I finally got around to pulling it and replacing the seals, after watching a bunch of different Youtube videos. I'll admit, I've never worked on a carburetor before. I got it back on and no more leaks... yay! Of course, I likely didn't adjust the choke correctly when I had it on the bench. I'm able to start it and it idles okay but it isn't running right. I have more work to do on that.

I knew this was going to be a pretty decent learning curve for me, but I was hoping that I could at least drive the truck without too much trouble. It sounded like the truck was running before I bought it, but I also knew there was a chance it wouldn't run good coming from a higher elevation (4500 ft down to 100 ft of elevation). I'll probably have to pull the carb again to adjust the choke, and probably check timing. Besides the carb tuning, there's an oil leak I need to look into.

I'm still working out what the overall plans will be for this truck but I'm leaning towards keeping it a budget project. I'm thinking I'd like to keep the 360 but freshen it up. Maybe swap in a Holley or Edelbrock carb and intake manifold (actually found this kit that also includes a cam and lifters - of course, it's on backorder until June), which will also allow me to eliminate the coolant and exhaust provisions that feed the factory carb to keep it warm, cleaning up the engine bay a little and opening the door for headers.

So part of me is wondering if I should just move forward with that right out of the gate instead of fiddling with the carb adjustments on the stock Motorcraft 2100. Or if I'm biting off too much too soon. Was thinking maybe I'd get that kit and just install the intake manifold and carb for now, and possibly install the cams/lifters a little later. I want to try and do this in stages so I can drive it without it being torn apart all the time.

The stock muffler has a big hole in it so I'll need to get the exhaust plan sorted soon. Not sure if there will be any issues with dual exhaust clearance with the 4-speed manual linkage. Once the intake manifold is swapped out headers are a no brainer.

The suspension needs a complete refresh. I can push down on the front end and watch it bounce up and down. The shocks are shot. The bushings are toast. A QA1 front end would be pretty bad ass, but I'm not sure I'll be going that extreme. I might just go with some lowering beams, new shocks, new bushings, rear axle flip, and power disc brake conversion. I'll probably get some new shocks for now while I put more thought into the suspension/chassis plans.

That's it for now. One thing I really want to do is make a project drawing/rendering. I'll have to make some time for that here soon, since this will be an official FTF project truck!
Last edited: Nov 29, 2021
-Chris

FE's are pretty torquey motors set up right. I have a few factory 4 barrel intakes around if you would be interested, but they are HEAVY... It is pretty easy to change that 360 to a 390. They are equal bore. Last 390 I had disintegrated the wrist pin snap rings in 2 cylinders and then proceded to rub deep grooves in the cylinder walls.

Only linkage you have to clear with the exhaust will be the clutch bell crank and connector rods. 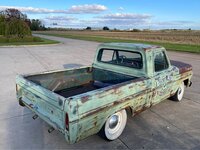 That's actually more of what I was looking for... Mine is a little cleaner looking than what I was envisioning - in some ways. Oh well, I'm pretty happy with what I found.

Good looking truck! My first pickup looked just like that, same color and everything but was a '71, 240 i6, and three on the tree.

Good luck with your upgrades!
- Russell

Jasperrc said:
Good looking truck! My first pickup looked just like that, same color and everything but was a '71, 240 i6, and three on the tree.

Getting ready to place an order on Jegs... 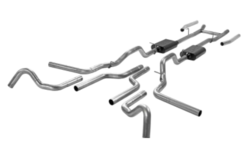 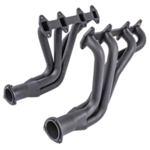 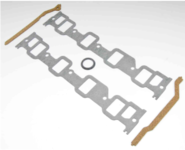 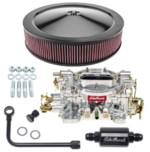 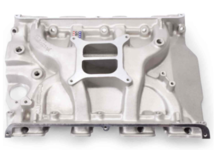 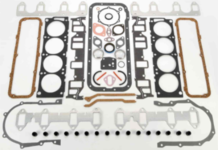 And some new motor mounts from Speedway.
-Chris

Well we know what you're going to be up to over the Christmas break!!!
Cheers Mark

kiwi f150 said:
Well we know what you're going to be up to over the Christmas break!!!
Click to expand...

I'll likely be splitting time building a 10x8 shed to move some more things out of the garage, and working on the truck too. Reminds me, I need to get a garage heater. I got rid of my old one just before we moved into this house last winter.
-Chris 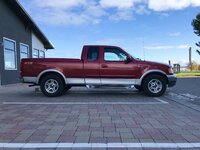 Jegs tracking info says everything should be here on Monday!
-Chris

So just a quick update, I have the exhaust manifolds off and am looking at how I'm going to get the long tube headers in there. I can tell I'll need to pull the starter and the clutch linkage, and I've read that I'll likely need to unbolt the motor mounts and lift the engine to be able to get them in there.

It looks like pulling the clutch linkage for the T18 is a matter of 4 bolts on the end brackets, and then disconnecting the rod end and pushing it out of the way (marked in green): 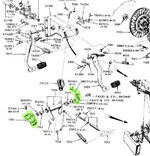 Sound about right to you guys? I suppose I could pull it all apart and replace the nylon bushings in there since I'm pulling the assembly.

I'll have some photos posted here shortly. Been taking a few here and there to try and document the process.
-Chris

Seems right. Might even get by undoing one side, but about might as well pull the whole assembly and inspect it. Not exactly a low wear part.
My trucks:
The workhorse, 86 F250 4x4 6.9 nat aspirated, 3.25 exhaust, custom intake, electric fuel pump, otherwise well used stock... not real pretty but just loves to work!

Before I put the passenger side header on I'm waiting for one of these starters from RobbMc Performance to arrive: 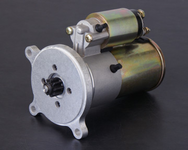 Would like to avoid putting the old starter back on and then killing it via heat from the header.
-Chris

I'm also getting quotes from a few different TREMEC specialists for a manual transmission swap: 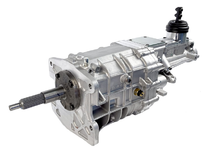 The factory T-18 4-speed is known to be pretty stout, but I would like to have some better gearing for highway driving and for some occasional towing. Plus, a hydraulic clutch would eliminate the shifter linkage, which looks like it's going to be sitting right next to the header flange.

Not sure if I'll move forward on this pricey swap right away, but at least I'll know what I'm looking at in terms of pricing.
-Chris

It's been slow going on this project lately, but I have the new intake manifold installed. I painted it Ford blue, but it doesn't really match too well. I'm thinking about pulling it and repainting it another color before putting everything back together. 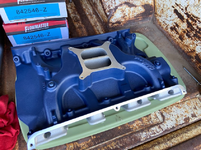 I'm still trying to figure out how the electric block warmer plumbing was done so I can remove it. The 5/8" hose doesn't appear to be running to a freeze plug: 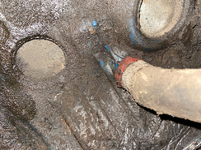 I need to clean it up and disconnect it to get a good look at the fitting/port in use. Hopefully it will be easy to plug.

I'm a little concerned about the view inside the bellhousing with the starter off, lots of gunk in there, probably some debris too as I've been pulling things apart and cleaning things up, but the flywheel looks good: 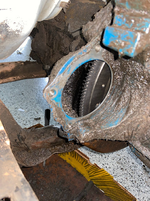 I'd really like to pull the whole motor and do a nice clean up and mini refresh, but I'm itching to get this thing on the road.
-Chris

Yeah, the blue back then was a bit lighter. I know the feeling, just comes down to whether you are willing to take it back down later to get it how you want or just get it done now while it already is apart. I know quite well about things not getting done on a preferred time schedule, mine has been blown to hell. Second round of covid has made it hard to get much energy up to get going, along with now dealing with probate and estate for my dad and an older sibling that is making it harder than needs to be.
My trucks:
The workhorse, 86 F250 4x4 6.9 nat aspirated, 3.25 exhaust, custom intake, electric fuel pump, otherwise well used stock... not real pretty but just loves to work!