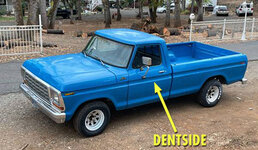 The term "dentside" in the Ford world refers to the 6th generation (1973-1979) Ford truck body style, which has a concave horizontal body line running down the side, along the belt line. In many cases, that body line has trim accenting it. This is in contrast with the "bumpside" Ford trucks, which was the 5th generation, the 1967-1972 Ford trucks, which had a convex body line (see image below). Some bumpsides have trim over the "bump", some don't. 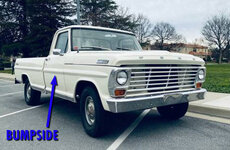 So what about Styleside and Flareside?

Flareside refers to the bed type. The Flareside is essentially the equivalent to the "Stepside" in the Chevrolet truck world, where the rear wheel wells sit outboard of the bed, and act as the fenders. 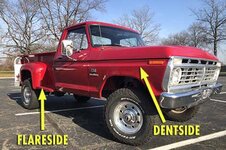 Styleside is the equivalent to the Fleetside in the Chevrolet truck world, where the wheel wells extend into the bed. 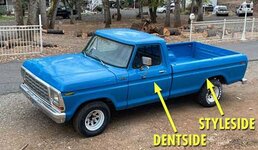 The 6th generation of the Ford F-series introduced various changes, with the model line expanding. For the 1973 model year, the regular cab F-350 became available with a wider "Styleside" bed - and as mentioned above, Styleside is . For 1974, a "SuperCab" extended cab pickup truck was introduced, between the 2-door standard cab and the 4-door crew cab. For the 1975 model year, the F-150 was introduced; it was a higher-payload version of the F-100 and it would become the most popular version of the model line, ultimately replacing the F-100 in the line up.

Another new offering in 1973 included the addition of the "heavy duty" F-350 V8 to the F-series line up. This new heavy duty pickup truck was built specifically for all of the professional contractors and camping enthusiasts of the world. It featured a longer wheelbase than an F-100 or F-250, measuring in at 140 inches versus 133 inches, yet retained the same overall length of the other models. There was also an option to order a "Super Camper Special", which was designed for the significantly heavier slide-in campers that were being sold at the time. It turned the F-350 into a full fledged RV.

Trim Packages:
The "Dentside" F-series model line up consisted of several appearance packages. For the 1974 model year, the Explorer package was offered on the F-100, F-250, and F-350, which included color-keyed exterior and interior trim features, badging, and wheel covers. The 1977-1979 "Free Wheeling" package (which was offered on the Custom and non-Lariat Rangers), included multi-colored tape stripes, silver or black interior, white lettering on the tires, optional alloy wheels, bed-mounted roll bar, and a bumper-mounted push bar.