anyone hear much about the 2009 model?

here is a link to an article with some heavly camouflaged pics.

uh... that looks sortof akward. Sorta feels like a nissan.

2. Titans don't have staggered windows, but the current F150 does. Example: Front door glass with the dip at the front.

3. Rear window looks no different than it does now. The center section is smaller than a Titan, which is 50% wider, and powers up/down.

4. Ricer? Take a look at a Fusion, this is the new corporate Ford look. The electric safety razor grille is similar to other Fords. The headlights look GMish. The taillights look like 2003 F150's.


If you wanna compare something to a Nissan, look at the current Silverado. Looks to me like Chevrolet copied most of it from the Titan, from the sloping windshield and pontoon front fenders to the wide open door on the Xtra cab, to the flared quarter panels, to the bed rail management system. The Titan takes some getting used to, especially the stubby front end. But IMO, the 2007 Silverado is ugly all over.
Last edited: May 22, 2007
Bill / Retired Ford Parts Manager / Part Number Research: 1928/2001 FoMoCo vehicles.

i'm not going to like the body lines. high box rail, drop dwn by rear window, again at door, back up at 1/4 panel. looks too busy even under the wrap. jmho, body lines should "line" up !!
carl, sassy,& Nancy(R.I.P. Babe and old Sassy girl. I miss you both very much,Semper Fi)

that thing has so much foam under the black cover it will probably look totally different when they unveil it.

just growing older not up

They had one at the Auto Show- White Pearl with tan leather Supercrew. We though it looked great- very heavy on the bling, but very good looking. Looks nothing like a Titan or Tundra- has that big, square, broad-shouldered "I'm a Ford truck" look to it that guarantees it'd never get mistaken for anything else.
"Hillbilly Deluxe"

id like to see them do what they did to the mustangs and do it to the trucks. Do a retro of the 67-72 series trucks...

A_G said:
id like to see them do what they did to the mustangs and do it to the trucks. Do a retro of the 67-72 series trucks...

You can expect to see a Diesel offered in the F150;s too..
Dave 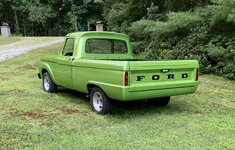 ​
Ford guy with a Jeep problem!​

eh, not so much.
The MISSOURI CHAPTER, come let us show you!​
Injected's nice but I'd rather be blown!​

john112deere said:
I am serving our country, one state at a time!
Click to expand...

The only thing positive I have to say about it is it does sport the blue oval...but I DO KNOW that Ford coulda done waaaaaaaaay better than that....As long as it runs like a Ford(reliable with no MAJOR problems) then i'd take one over any other brand name if I was to own an '09 model.
-Cody:Ford Truck enthusiast

i think its about damned time ford stepped up to the nicer trucks. He have bought 6 "anything but ford" trucks in the last years, because basically, ford was lacking.

I like the new rear end, its slick, the side looks the same as the old one to me, and the front end is following along the lines of the new super duty.

All in all that truck is a nicely wrapped, much more luxury oriented and finally stands out as something i would consider owning.
1985 f-150 flareside